*Scene 6 of the opera: Chang O Flies to the Moon can be performed separately in concert. Chang-O programme note 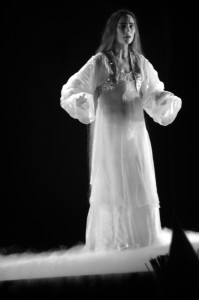 Touching on the shamanistic origins of performance (significantly an earlier work by Lim was based on a classical piece of mythic Greek theatre, the Oresteia), Moon Spirit Feasting is a frenetic helter skelter ride of anima-driven, procreative and mystical proportions. Mezzo soprano Melissa Madden Gray (as Queen Mother of the West and Demon Goddess) and the baritone Orren Tanabe (the Archer Hou Yi and Monkey King) contest differing versions of the legend of the Moon Goddess Chang-O (soprano Deborah Kayser). The performers seem possessed: vocal and physical virtuosi. The extravagantly kitsch, super-sensible realm of these vexatious gods makes us feel richly, positively, contradictorily human. And these are not just 9 musicians being conducted by the man 3 seats along, they are monks, ghosts and humans crying out in another and necessary voice. In contemporary chamber music style, the compelling, hybrid musical score uses Eastern and Western instrumentation to transport us from the bustling street to the stillness of the stars. The final, cosmic image of the Moon Goddess Chang-O brings us full circle back via Constance to Nora embodying a similarly solitary, ambivalent freedom. – Douglas Leonard, ‘Regenerative Inversions’, RealTime issue #75 Oct-Nov 2006 pg. 8.