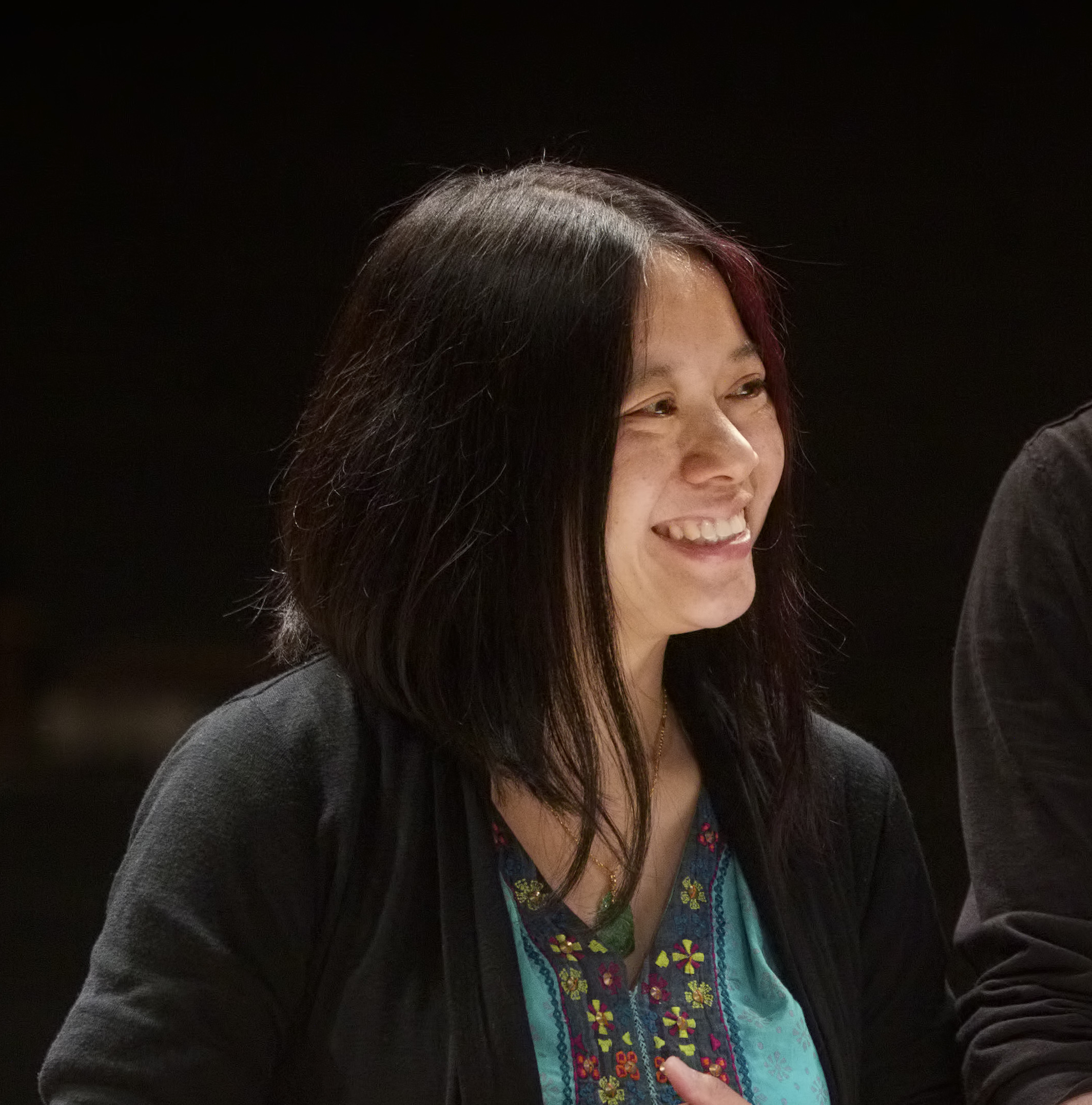 ‘what emerges in the haunted ruins of capitalist destruction?  – vulnerability, precarity, unpredictability – these might actually be useful tools for finding and understanding new stories – stories of multi-species collaboration, stories of transformative encounter – not a tale of heroic progress but a symbiotic ‘becoming with’ the world that sings to and hears resurgence’
(with thanks to Donna Haraway; Anna Tsing)

Liza Lim’s music focusses on collaborative and transcultural practices. Ideas of beauty, ecological connection and ritual transformation are ongoing concerns in her compositional work. Her four operas: The Oresteia (1993), Moon Spirit Feasting (2000), The Navigator (2007) and Tree of Codes (2016), and the major ensemble work Extinction Events and Dawn Chorus (2018) explore themes of desire, memory, and the uncanny. Widely commissioned by some of the world’s pre-eminent orchestras and ensembles, Lim is Sculthorpe Chair of Australian Music at the Sydney Conservatorium of Music and was a Fellow of the Wissenschaftskolleg zu Berlin in 2021-22. Her music is published by Ricordi Berlin.

2022-23 season highlights and next projects

Machine for Contacting the Dead (2000) a work for 27 musicians originally commissioned by the Ensemble Intercontemporain receives its German premiere at the Berlinerfestspiele Musikfest on 11 Sept performed by Ensemblekollectiv Berlin conducted by Enno Poppe. This concert will be preceded by the book launch of ‘The Music of Liza Lim’ by Tim Rutherford Johnson, published by Wildbird Music.

Mary/ Transcendence after Trauma (2021) will receive further performances from the Deutsches Symphonie-Orchester conducted by Lothar Zagrosek at Ultraschall Festival Berlin (18 Jan 2023) and  the Bavarian Radio Symphony Orchestra, conducted by Franck Ollu in the season of Musica Viva Munich (12 May 2023). The work was premiered as part of the full Annunciation Triptych in April 2022 by the WDR Sinfonie-Orchester conducted by Cristian Măcelaru with soprano Emily Hindrichs and recorded for CD release on Kairos (2023).

Sex Magic (2020) will return to The Kitchen in New York on 22 May 2023 as part of Claire Chase’s week-long marathon reprise of the first 10 years of her Density2036 project. Claire and Senem Pirler on electronics recorded the work @Studio9Porches which will be released on New Focus Recordings.

Extinction Events and Dawn Chorus (2018) had 5 performances in the 2021/2022 season: from Lucerne Festival Contemporary ensemble (Lucerne), Klangforum Wien (Berlin), Wavefield Ensemble (New York), Riot Ensemble (Aldeburgh Festival) and Ensamble CeproMusic (Mexico). Its next outings are from Cepromusic in Mexico, Ensemble Phoenix in Basel, Crash Ensemble as part of their 25th Anniversary in Dublin, ELISION Ensemble in Melbourne, then next June 2023 in a program with Haydn’s The Creation (!) performed by the Philharmonischen Orchester Freiburg with ensemble recherche at Theatre Freiburg.

Liza Lim (b.1966, Australia) is a composer, educator and researcher whose music focusses on collaborative and transcultural practices. The roots of beauty (in noise), time effects in the Anthropocene and the sensoria of ecological connection are ongoing concerns in her compositional work. Her four operas: The Oresteia (1993), Moon Spirit Feasting (2000), The Navigator (2007) and Tree of Codes (2016), and the major ensemble work Extinction Events and Dawn Chorus (2018) explore themes of desire, memory, ritual transformation and the uncanny. Her genre-crossing percussion ritual/opera Atlas of the Sky (2018), is a work involving community participants that investigates the emotional power and energy dynamics of crowds.

Liza Lim has received commissions and performances from some of the world’s pre-eminent orchestras (Los Angeles Philharmonic, Bavarian Radio Symphony Orchestra, Orchestras of the BBC, WDR, SWR) and was Resident Composer with the Sydney Symphony Orchestra in 2005 & 2006. Her work has been featured at the Spoleto Festival (USA), Miller Theatre New York, Festival d’Automne à Paris, the Salzburg, Lucerne, Holland, Venice Biennale Festivals and all the major Australian festivals. She has had a crucial 30-year collaboration with the ELISION Ensemble and has regularly worked with Ensemble Musikfabrik, Ensemble Intercontemporain, Ensemble Modern, Klangforum Wien, International Contemporary Ensemble, Cikada Ensemble, Arditti String Quartet and JACK Quartet amongst others.

Lim’s music has been published exclusively by Casa Ricordi (Milan, London & Berlin) since 1991. Her music appears on CD labels such as Kairos, Hat Hut, WERGO, ABC-Classics, Neos, HCR and Winter & Winter. She has published journal articles on subjects such as transcultural aesthetics, performer collaboration and distributed creativities. Her research has been supported by grants from the British Academy, by an Australia Council Interdisciplinary Fellowship and Ian Potter Foundation Senior Fellowship as well as numerous international commissions. Other recognition for her work includes the Don Banks Award for Music (2018), the Peggy Glanville Hicks Residency (1995), Paul Lowin Prize for Orchestral Composition (2004), Fromm Foundation Award (2004) and DAAD Artist-in-residence Berlin (2007-08). She has been awarded the 2021 Happy New Ears Prize of the Hans and Gertrud Zender Foundation and was a Fellow of the Wissenschaftskollleg zu Berlin in 2021-22. She was elected a member of the Akademie der Künste, Berlin in 2022.

Liza Lim is Sculthorpe Chair of Australian Music and Professor of Composition at the Sydney Conservatorium of Music. She facilitates the Conservatorium’s Composing Women program in amongst other advocacy work as well providing academic teaching and research leadership. Her composition teaching seeks to amplify and strengthen the specific poetic energies of each student as they interact with particular contexts. She was formerly Director of CeReNeM, the Centre for Research in New Music at the University of Huddersfield, UK (2008-2017) where she established the highly regarded HCR CD label as well as the Divergence Press and CeReNeM Journals. She was Visiting Professor of Composition at Shanghai Conservatory in China during 2017. In 2018, she was Resident Composer at Boston University’s Centre for New Music. She has taught at numerous international summer courses including Darmstadt, Royaumont and Ensemble Evolution at Banff as well as serving on panels as a guest speaker and jury member. She was a founding member of the Academy of the Arts of the World in Cologne and curated the music program for their inauguration in 2012. Liza Lim received her PhD from the University of Queensland, an MMus from the University of Melbourne and BA(mus) from the Victorian College of the Arts. Important composition teachers for her along the way include Richard David Hames, Riccardo Formosa and Brian Ferneyhough.